Bridge of Deaths by MCV Egan : Peace Blitz! 73rd anniversary of the crash of the G-AESY 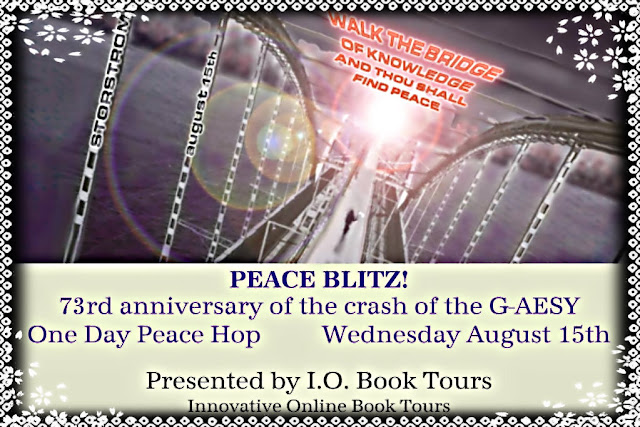 The Bridge of Deaths
Living in South Africa, I've seen the last part of the Apartheid regime and the fight for freedom, as a woman, a sister, a daughter and a human I have seen enough to know that I am going to have days that I am blue and days of walking on sunshine.
So I needed to come up with a topic with peace in it for this blog. I had multiple choices, but not the unique voice I wanted.  So a few days after agreeing to the blog hop, I walked into a mall.  In the atrium of the mall a few tables have been set out, around these, children. The task at hand; to build a scale model bridge.  I looked at the schematic and the photo of the bridge they were building and was immediately reminded of the blog hop.  Amused, I stood and watched them.
The exercise was to get children involved and interested in engineering.  They were provided with preset pieces that had to be assembled into a bridge according to the schematic provided.  It was obvious that they spent some time engrossed in this task at that stage.  Some groups was much further along with their bridge than others.  Watching them, it became clear that this is a group activity, and where members in the group were slacking or over achieving, it turned out that the bridges were not being built.  I also noticed that the bridge pieces were perfect puzzle pieces.  I, with no interest or knowledge of engineering would be able to assemble this impressive bridge in what I guessed would be 20 minutes.  It is simply building a puzzle and gluing the parts together.
Strangely enough, none of the children saw this, they were approaching their task from an engineering point of view and thus they managed to over complicate things.  I walked away and a few hours later, I passed them again.  Same children, now very frustrated, building what they figured to be a very complicated bridge.
I walked away giggling and slowly the voice of this blog came to me.  In life, war is a complicated way of solving mostly simple problems.  If you refuse to look at a task, problem, relationship from several perspectives, you probably never will see that a very simple solution is at hand.  Going into a situation with preset ideas and information, limits this ability to look beyond the obvious to alternate points of views.
On a smaller scale, within relationships etc. it might be prudent to simply try and take a step back, to see if it is possible to address whatever issue is at hand from a perspective not your own, especially if what you are doing is obviously not working.
On a smaller level still, building a bridge from an engineering perspective while you could approach it as a puzzle piece is daft.  But these children were made to believe that the bridge they were building needed to be an engineering feat, that this scale model needed to adhere to rules and physical laws.  So they were totally blinded to the fact that if they simply construct it, their task would have been at an end and they would have been able to win a nice prize.  But they never saw it!
So in life, this is my advice; do not complicate things, not even complicated things.  Simplify and relax.  Build a bridge with others, it is much simpler to glue something together with 3 sets of hands than with only one. Also, it will be done much better and much more professionally.
Do not burn the bridges you have built.
Do not step on it without remembering how much effort it took.
Do not forget who helped you built it and most of all;
Never forget that those who did not help or could not help, need a bridge as well.
So grant them access but do not let them desecrate what you have built.
In this way, I really do believe, we all will manage to live in harmony.