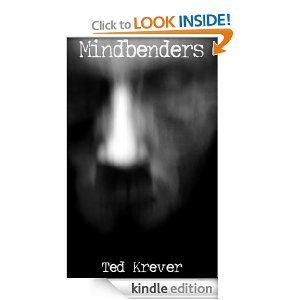 "A dead-on thriller for the decade...I can't imagine anyone reading this and not wanting more." --Thomas F. Monteleone, author of the NY Times bestseller, The Blood of the Lamb and The Complete Idiot's Guide to Writing a Novel

Max Renn is a legend of the Soviet mind control program, a genetic experiment, the product of three generations of psychics bred by the state for their power. Before his first mission, the Soviet Union collapses and he disappears.

We meet him twenty years later in the Everglades, keeping as far from people as he can get, until his best friend-his only friend-is murdered and he is forced to assemble a team of people like him to fight the international conspiracy behind the murder.
~~~~
"Ted Krever has been a writer to watch, now he's a writer to read. Do not miss MINDBENDERS." -F. Paul Wilson, author of the NY Times bestseller The Keep and the Repairman Jack novels.
"Ted Krever is a great storyteller, but more importantly, the stories he creates and writes are ones that I want to read.  In this ADD era, where even e-mails are considered too long, Ted's work commands my attention.  It is definitely worthy of yours too." -David Leaf, biographer and award-winning writer/director/producer of such films as "The Night James Brown Saved Boston, "The U.S. Vs. John Lennon" and "BEAUTIFUL DREAMER: Brian Wilson & The Story of SMiLE."

I adore this book.  The plot is complicated without being confusing, the story is fresh and engaging and the characters are fully formed and fledged out.
The title alone should tell you what the basic premise of the book is.  The question is, what happens to a project upon which the government has given up.  A project that was marginally successful.  What if the people in the project carries on with their tasks, who is bankrolling it and to which end?  If the CIA, FBI, NSA etc is no longer involved, black opps is not an option, who and why is the project still active?

I give this book a smooth 8 * review, it is different from most books I have read recently and I commend the author on using the cold war and it's consequences to such delectable reading.
Posted by Wanda Hartzenberg at Wednesday, June 27, 2012