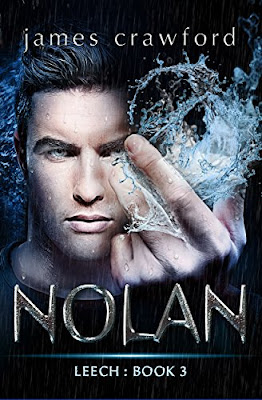 Every High school has its rock star. Maybe it's the quarterback, head cheerleader, or the valedictorian--the one student who outshines the rest. The one everyone knows will be successful in the years to come. For Nolan that was a lifetime ago, before he lost his sight, before he even knew what a Leech was.

Now, all Nolan wants is to see Caleo survive to fulfill his destiny. A task that is becoming increasingly difficult as the government wades into the war, new enemies appear and the number of people trying to kill them skyrockets.

Nolan by James Crawford
My rating: 4 of 5 stars

This is the third book in the Leech series. I really enjoyed it.

Jack Barely is a fantastic character. I loved him from when I met him in the first book, Caleo. He is a very confident young man, who usually has a great sense of humour. However, he has one regret: that he didn't tell Caleo how he felt about him.

Caleo Anima is a wonderful character. I really liked him. He is a warm and loving young man, but because of his pale skin and snow white hair, he is seen as an oddity and is shunned by most of his peers. He is a Leech, someone with an extraordinary power. He can manipulate temperatures and can freeze people and things with only a touch. He also has a destiny as the one true Angel.

Unfortunately, due to my rather large reading list, I've not been able to read this book as quickly as I would have liked. In fact, it's taken me two years to get to read it since I purchased it and I apologise to the author for the delay.

This book continues on from the end of Jack (Book 2) and follows on with the view points of Caleo and Jack. The war between the two camps of Leeches is still raging. Caleo is still struggling with his growing feelings for Nolan, and Jack is determined to find both Caleo and Nolan and escape the clutches of Steve.

Although this book is named Nolan, I found myself slightly disappointed that there were no scenes in Nolan's POV to match the other books. I loved the first two books, but this one seemed to have lost something in its telling and it didn't give me that same excited feeling when reading. This made me feel a little sad.

As the story progressed, I realised how much I had missed the characters. They are likeable (apart from Alix and Steve) and lifelike. There are a lot of new characters introduced, but they never really made a huge impression on me and I can't even recall their names. I was glad, however, to get to know Mickey a lot more.

I was completely entertained by the fast paced storyline. This kept me turning the pages to find out what was happening. There are a few battles, as well as a few touching scenes that had me riding on a roller coaster ride of emotion. There are also a couple of surprising twists that I never saw coming. I love the way Caleo's and Jack's relationship has grown throughout the series. I think Nolan being thrown into the mix may not have done the storyline any favours as I am not a fan of love triangles at the best of times. However, other readers may have a differing opinion on this point. I will leave it up to you to decide for yourselves.

The story ended in such a way that I was satisfied with it; it does not end on a cliffhanger in case you were wondering.

james crawford has written another fast paced novel that kept me hooked from the first page! I love his writing style, it's easy to get lost in the world he has created. I look forward to reading more of his work in future.

This is a fantastic book in an amazing series. I highly recommend this book if you love LGBT, YA/Paranormal/Science Fiction genres. - Lynn Worton 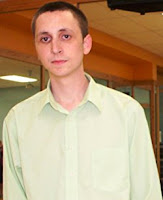 Hello I am james crawford. I know this is the part where I should mention all the fabulous awards I have won, and all the amazing adventures I have gone on, but that's not me. I’m not important or special. I'm just a man who lives in his dreams and writes them down for others to enjoy. One of those dreams turned into my Young adult book series Leech. As a boy growing up I realized there were too few Lgbt heroes for kids to look up to and even fewer that weren’t over sexed stereotypes. I didn't see anything that really represented me and those like me. This is why I decided to start writing Caleo- to give young adults a homosexual hero who is not defined by his sexual orientation.